An Aquifer of Legend Beneath Mt.Hakkai 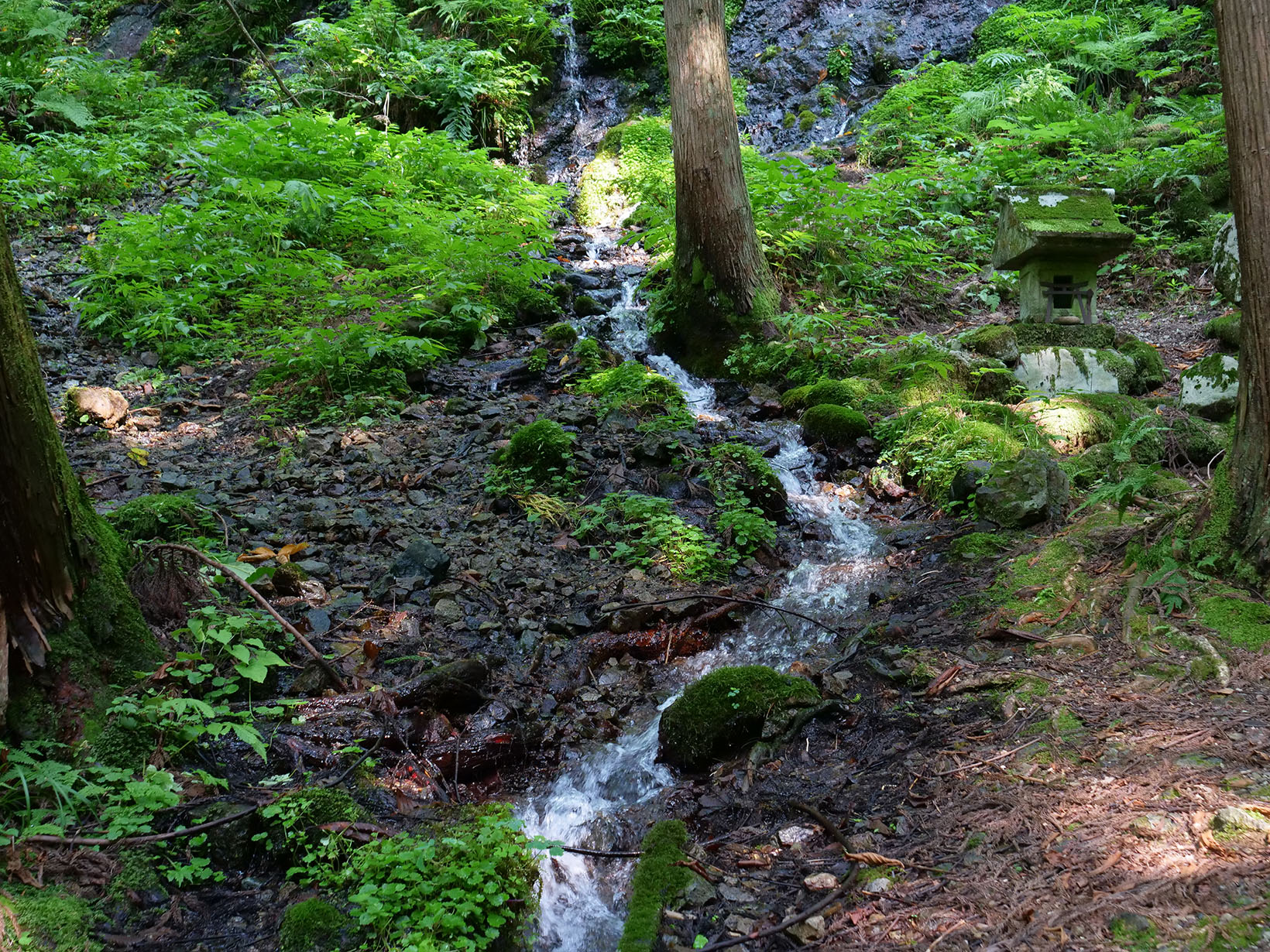 At the base of Mt. Tochinoki in the Fujihara district, a water that gushes forth from the mountain’s rock surface is known as Raiden-sama Spring Water and it is used as drinking water by the surrounding community. In the heavy snowfall region of Minamiuonuma there is a large range in seasonal temperatures, peaking at an average of 27℃ in summer before dipping to an average winter temperature of -1℃. However, despite these varying climates, the water temperature of Raiden-sama Spring Water feels refreshingly cool at 12℃ in summer, and remains a pleasantly warm 11℃ through winter.

It is said that every hour nearly 16 tons of spring water percolates through the mountain’s rock surface and flows from the spring on the southern face. And even at times when the central mountain stream runs dry, this spring water invariably continues to flow. No matter how much sunshine or rainfall continues to fall over this region, the spring water’s steady flow persists and its quality is never tarnished.

I would certainly like for many people to taste this Raiden-sama Spring Water. Tea steeped in this water becomes some of the finest in all of Japan, and when used for a whiskey "mizuwari", steaming rice, or brewing coffee, the water’s spectacular taste is unmatched. Those not only from the surrounding villages, but even the people who come from other prefectures to fetch water here seem to be never-ending. So what is it that makes this water so delicious?

Raiden-sama Spring water begins as snow that has piled up on top of the surrounding mountains in winter. Once this snow melts, it permeates the earth’s surface on and around these peaks. This water then takes years before it comes back above ground and erupts through gaps in the mountain’s rocky surface. While the water is underground it undergoes a natural filtration process. Any impurities that may be contained inside the melted snow are filtered out, and after becoming a pristine water containing many minerals from within this fertile ground it springs forth. People say that in this stage, as the water spends a long period inside the earth, flavorful ingredients gradually dissolve into it and an especially delicious spring water is created. Even in the heat of the summer this water is cold and smooth-tasting. For this reason, it’s been recognized as one of Niigata’s famous natural springs and has come to be known as a water that is used daily by many.

Incidentally, Minamiuonuma is situated in a prosperous sake brewing region of Japan. Two elements that are absolutely essential to the production of delicious sake are a natural environment appropriate for brewing and a delicious, pure spring water. In sake making it is said that the amount of water needed is around 30 to 40 times the product yield, but the impressive amount of snowfall that piles up here annually makes Minamiuonuma a perfect environment for sake brewing. This abundant Raiden-sama Spring Water has been used to produce the refined sake of Hakkaisan, and plays a key role in the city’s sake industry there. Each of the refined sakes being produced in this city has its own delicious spring water supporting it from behind the scenes.

In Minamiuonuma there are numerous places where natural springs flow outside of Raiden-sama Spring Water. We would be delighted if you stopped by and gave some of this mountain spring water a try.

A long time ago in Fujihara, there were seemingly endless instances of people falling victim to lightning strikes. It is said that once the settlement had enshrined Raiden-sama, the god of thunder & lightning, and made offerings here to ward off these incidents there were no further victims to lightning strikes. The water called Raiden-sama is a spring water that has flowed for thousands, tens of thousands of years, yet the name Raiden-sama Spring Water is one that had been granted through this particular sequence of events.

Furthermore, on the grounds surrounding the Raiden-sama Spring Water there were once many great Japanese chestnut trees. The circumferences of the tree trunks were 40 meters around, and underneath the trees rain was always falling so people claimed even during midday the place was dark and frightening. Locals have also rumored that they could hear the voices of spirits there. When evening drew near, from above the trees a hoarse voice would bellow, “Children, return to your homes at once. If you don’t go back soon Raiden-sama, who has grown hungry, will gobble you up along with the chestnuts, and you’ll be made into his spring water.” Dwelling in these woodlands there were once many spirits, yet all of them were servants to Raiden-sama or so it is said.

The Tochinoki Mountain Stream of the Showa

The raging waters of the Tochinoki Mountain Stream are a beautiful sight and brought enjoyment to many as a habitat for fish like char in my day. Blocking these fish from swimming upstream rose the central Sennotaki Waterfall, and 100 meters downstream of here a deep pool where large char would always gather and could be found swimming had formed naturally. Young people including myself would spend days having raucous fun from dawn ‘til dusk on the banks of this stream, in a setting that I'm certain I will never forget. 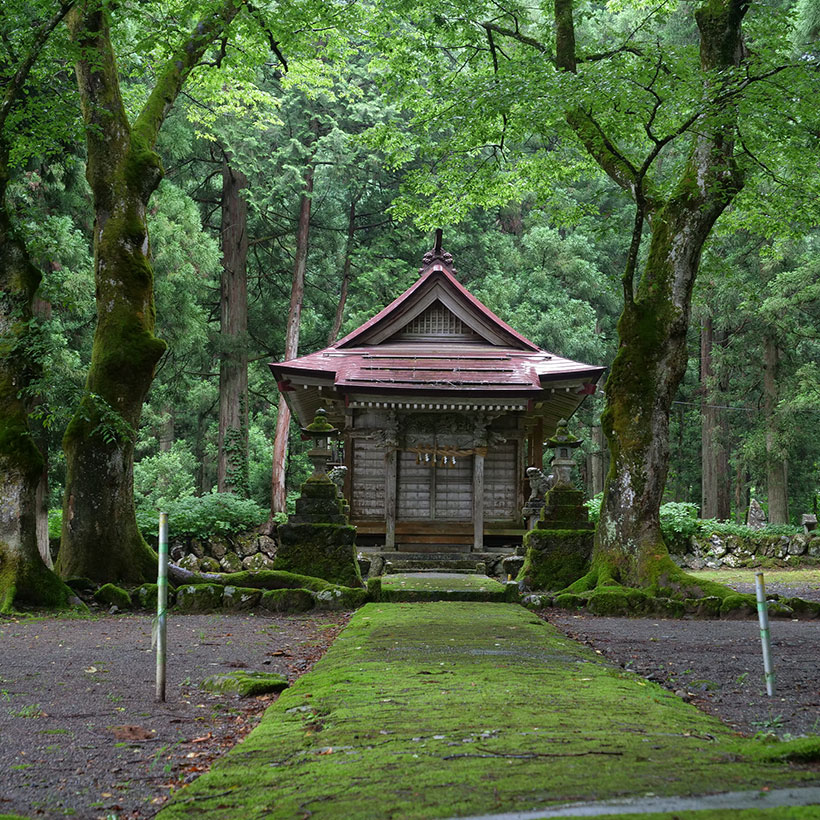